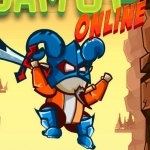 Sam served the king as a jester and had a lot of fun for the monarch and his retinue. But once blurted out something, without thinking and the king, without hesitation, threw the buffoon into a deep hole. Such a poor fellow did not expect. But he is not going to die, and you will help him to get out. The hero must jump on the walls, and simultaneously collect gold. SamUP Online is one of the amazing free games in friv-com.com. Try SamUP Online and Pick your best Friv.com game in the awesome long list with no charges.

Use Left Mouse button to Play